A Store Like No Other | News, Sports, Jobs – The Steubenville Herald-Star 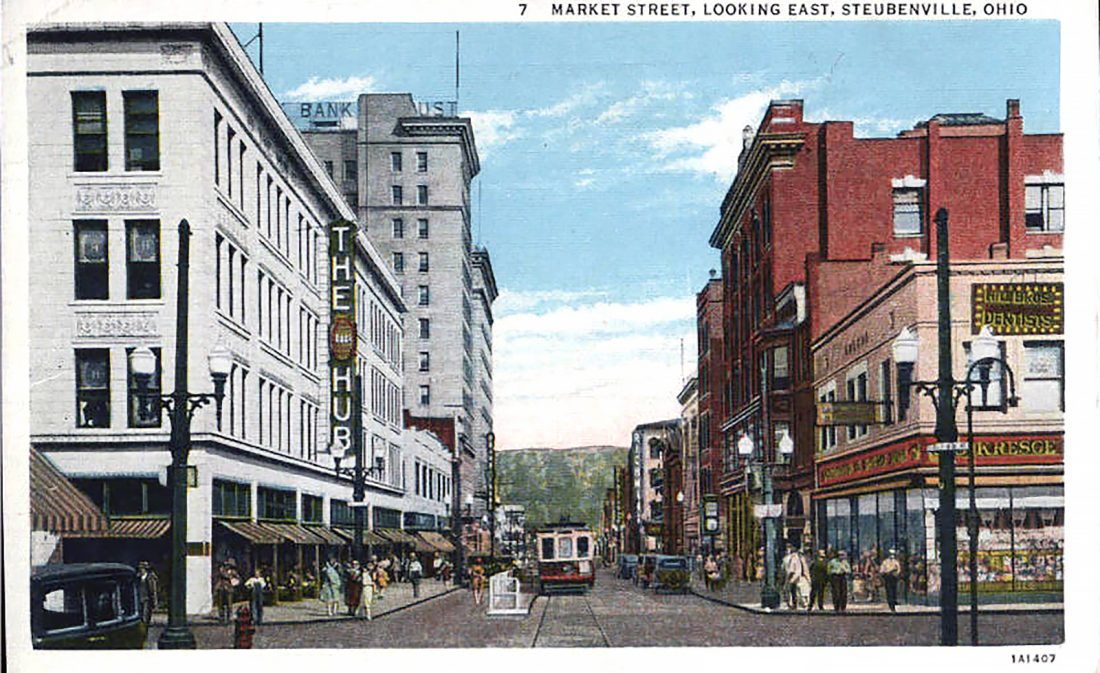 LOOKING BACK — This postcard view of Market Street looking east with the trolley car where visible business signs include The Hub, S.S. Kresge building, Richman’s and Union Bank. — Contributed

(EDITOR’S NOTE: As part of the Academy of Lifelong Learning’s fall classes for area seniors, Alan Hall, director emeritus of the Public Library of Steubenville and Jefferson County, presented a class on what was a well-loved and patronized and now fondly remembered store that was a major part of downtown Steubenville — The Hub. For many current and former area residents, shopping at the Hub, during the holidays or any time of the year, was a special experience. In today’s Valley Life, Hall shares some of the Hub highlights from his class.)

If you are older than 45, you will remember the customer shopping that took place in the “local department store. In the Steubenville area, that would include The Hub Department Store.

In the later part of the 19th Century, America’s cities saw the development of local department stores, usually named after the person or family that took a store and expanded it with other smaller stores, or departments, to create a shopping event.

In Steubenville, that local department store planted its roots on April 9, 1904, at the corner of Fifth and Market streets where the Towers stands today, when two brothers named Simon J. Anathan and Mone Anathan borrowed money from Philadelphia merchants to start Anathan Brothers Inc. better known as simply, The Hub.

They stocked the store with men’s clothing and men’s furnishings and offered their merchandise to Steubenville. Two years later, two younger brothers Eugene and Louis, joined them in their new venture. The Anathans, like other downtown merchants, lived on the upper floors of the building in those early days.

The Hub was so successful that in 1909 they relocated the store to the opposite northwest corner to a three-story commercial building where the four brothers and two other employees prospered in business. By 1916, the brothers purchased the Johnson Block building next door and expanded their stock by opening other departments. The store was open from 8 a.m. to 6 p.m. five days a week and until 11 p.m. on Saturdays — common in those days to accommodate farmers.

Their brother-in-law, Martin Bayersdorfer, joined the business in 1918, but plans to renovate and expand the buildings were delayed with World War I. Finally, in 1922, materials became available to expand the two buildings at Fifth and Market streets to a five-story building, including the basement with the familiar white-glazed terra cotta facade that made the department store look enormous.

The two youngest brothers died in the 1920s, but the next generation of Anathan family members were added to the team in the 1930s. New departments were added with demand; other departments went away as times changed. A multi-story warehouse was added in the rear. The city bus lines stopped immediately in front of the store, and customers from all across Eastern Ohio came to The Hub as their shopping mecca. The 1930s and the Depression were hard on The Hub, and they had to expand services to make the store attractive to shoppers with minimum funds. In 1938, a credit department was established to aid customers in making purchases in The Hub.

After World War II, America’s department stores were booming with business, and The Hub had moved into the next generation of Anathan family members. Major improvements were made to the store in the late 1940s, and by 1954 the entire building was air conditioned. Throughout the 1950s, the entire store was renovated, including dressing rooms and lounges, the beauty shop, the bridal shop, the maternity shop, the little shop for children, the millinery shop, and men’s and women’s shoe department.

In 1960, a new entrance on Fifth Street joined the main entrance on Market Street as more customers arrived by car. The Tea Room restaurant on the mezzanine was changed and renovated several times.

In the 1960s, The Hub employed 325 staff members and was open 9 a.m. to 5 p.m. six days a week, open on Monday and Thursday nights until 9 p.m. with expanded hours between Thanksgiving and Christmas. But it was never open on Sunday.

The store had expanded so much that in 1955 it became “The Hub of Steubenville Inc.” as a way to manage the large business.

But times were changing, and with the appearance of larger local stores open seven days a week, The Hub’s business model needed changed. Unlike West Virginia and Pennsylvania, Ohio did not have “blue laws” preventing stores from being open on Sunday. The concept of shopping centers and malls with ample free parking was having its impact on The Hub.

In 1968, The Hub of Steubenville Inc., and the L.S. Good & Co. of Wheeling merged operations effective in 1969 with store renovations and expanded parking. In 1970, L.S. Good & Co., the new corporation, acquired Gable’s Department Store of Altoona, four department stores in Michigan and Bonham’s Department Stores in Marietta and Cambridge to widen their customer base and purchase merchandise in larger quantities. The move seemed to work for a while, but competition from stores with longer hours and less overhead were impacting the “local department store” operations in America.

In 1978, The Hub name on the Steubenville store was changed to “L.S. Good & Co.” although local customers generally failed to follow the renaming.

The staff of the Steubenville store was half what it was at the peak of the 1960s, and on May 27, 1980, L.S. Good & Co. filed petitions for corporate reorganization and protection from creditors under Chapter 11 of the Federal Bankruptcy Code.

The William F. Gable store in Altoona would be immediately closed to stem the tide of financial bleeding of the company.

In barely two months, the reality was found that L.S. Good & Co. was in a serious financial situation and asked that all stores be closed and liquidated except for the store in downtown Wheeling and the Ohio Valley Mall at St. Clairsville.

By the end of July 1980, testimony showed that the downturn had started in 1976 and by 1980 a huge debt had accumulated against various banks, credit departments and leasing companies.

In the final days, nearly everything not owned by a leasing company in the building was sold against the debt, and the building and property were sold more than once for potential businesses. Eventually, the complex was demolished in 1993.

Reunions of the proud employees of The Hub were held for several years following the closing, and the Public Library of Steubenville and Jefferson County was the proud recipient of scrapbooks maintained by longtime employee Gladys Edwards Davison (1904-2007) who had worked for The Hub for 48 years. Those scrapbooks were reworked, and the library’s local history department staff researched and added information to them. They are digitized and online for all to enjoy.

The same story can be told across America where memories of shopping in the local department store abound, especially holiday stories at many “toylands” in those stores.

The last of the locally-owned department store in the United States seems to go to Freedlanders Department Store in Wooster. David Freedlander opened his store in 1884, and it was operated by Herman and Herald, his descendants, until 1999. Wooster native Stanley Gault, owner of Rubbermaid and Goodyear, had wonderful memories of the store and purchased it, feeling that a great local department store could be successful. In 2008, he said that the store would no longer operate, and it closed after the Christmas season and was then demolished.

Like so many of those local department stores, the building had been renovated and expanded over and over and was beyond active use.

As many of you know, I am a native of Marietta, and I have warm memories of going with my grandmother to Bonhams Department Store, another of the businesses acquired by L.S. Good & Co. My grandma Maggie still called it Turner-Ebinger, its first name, and I remember taking her hand as a small child and riding the elevator. She roamed the store looking for just the right item, maybe stopping on the mezzanine restaurant for a treat or enjoying the store displays for all the wonderful things that could be purchased.

I don’t think looking at a computer screen and picking up something on your porch will replace that time with grandma.

Today’s breaking news and more in your inbox